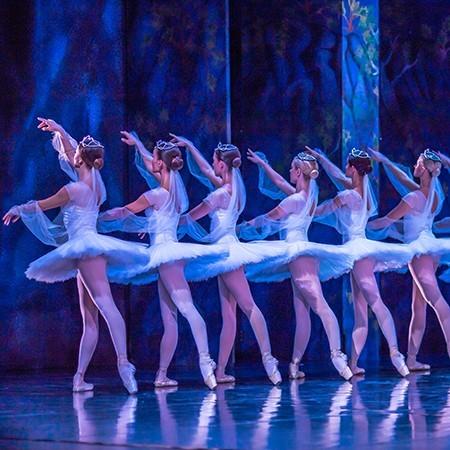 World premiere on 23 January, 1877 at Mariinsky Theatre
Premiere at the Estonian National Opera on 16 May, 2013

“La Bayadère” is a story of eternal love, vengeance, and justice. The ballet recounts the story of the impossible love between a temple dancer (bayadère) Nikiya and the noble warrior Solor. In a moment of forgetfulness, Solor becomes engaged to the Rajah’s daughter Gamzatti and in order to assure the young man’s love for Gamzatti, the Rajah decides to kill Nikiya… The first production of the ballet was a vast and expensive production: Act 2 was conceived for 200 dancers and a stage elephant. “La Bayadère” is an important connection between the romantic and classical eras of ballet. Although a major work in Russian tradition, the ballet remained unknown for a long time in the West. It was only in 1961 in the course of a Kirov appearance at the Palais Garnier that a stunned public was able to discover its beauty. “La Bayadère” was the creation of the choreographer Marius Petipa, the renowned Premier maître de ballet of the St. Petersburg Imperial Theatres. The music was written by the composer Ludwig Minkus, Petipa’s chief collaborator, who held the official post of Ballet Composer to the St. Petersburg Imperial Theatres in 1872–1886. The most notable numbers in the ballet include the incredibly demanding men’s variation “The Golden Idol” and the scene of “The Kingdom of the Shades” that has become a symbol of ballet and is quite often performed on its own. It is this scene that inspired critics to write “If you don’t enjoy “La Bayadère”, you really don’t enjoy ballet!”