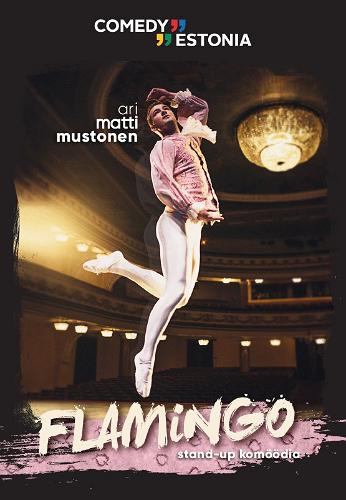 “Flamingo” is Ari’s new show, that he has developed for nearly two years. On this tour he will present his best new material in his favourite theatres and concert halls all over Estonia. His new hour is his most dirtiest, sweatiest and fierce material he has ever written. Ari’s fans know, that each and every show will be different than the last one, and to get the best experience, you have to come see his show live!  The only thing that is certain is that the show will be full of grace and bravado because we all know that Ari is a fucking FLAMINGO! The tour will culminate with two spectacular shows at Alexela Concert Hall in Tallinn.
Bio
2020 – Nationwide tour “Hüppa!”, which sold over 13 000 tickets in two months. Biggest Comedy Estonia tour to date!
2020 – Stand-up special “Hüppa!” premiered on Youtube, which has over 250K views already. To date, Ari’s stand-up clips has over 5 milion views on Youtube
2019 – Ari performed a sold out show in historical Rio Theatre in Vancouver
2019 – Ari released his 2 stand-up specials “Ari Matti LIVE” and “Savage”(filmed 2018) that are both available at Comedy Estonia webshop
2017 – Ari started a  biggest and most popular podcast in Estonia called “Tussisööjad” with fellow comedian Mikael Meema
Ari is also worked with multiple TV stations and online platforms as a MMA fight commentator.

Show is recommended for ages 16+