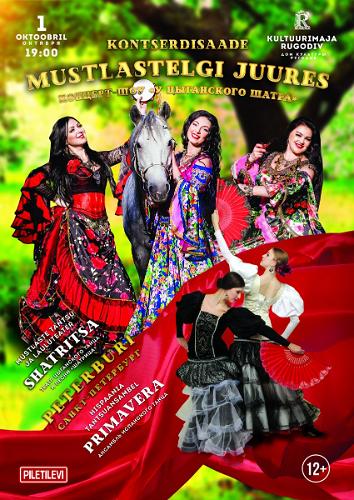 Concert show "At the Roma Tent"
Two unique St. Petersburg groups will perform at our gypsy tent.
Dances and songs of Russian Gypsies will be performed by the Theater of Gypsy Dance and Song "Shatritsa". This young collective has confidently declared itself in the concert space of Russia and Europe. His repertoire includes traditional, beloved by everyone, works of gypsy folklore. Talented dancers, using the tabor dance technique combined with professional choreographic training, are able to conquer even the most demanding and demanding spectators. Each dance is an original musical miniature and a part of an enchanting theatrical costume performance.
Artistic director and vocalist of the Theater Olga Smirnova deserves special attention. Old gypsy songs performed by her will not leave indifferent any of the audience!
The dances of Spanish gypsies will be presented by the Folk collective Spanish Dance Ensemble "Primavera". This long-established collective with its bright Spanish personality, original numbers, professional technique of performance and imaginative presentation has been pleasing and surprising its audience for twenty years. The repertoire includes traditional Spanish folklore, flamenco, performances by Spanish choreographers and original performances by Artistic Director of the Honored Worker of Culture of the Russian Federation Yulia Malysheva.
Both groups are multiple winners of all-Russian and international dance and vocal competitions.