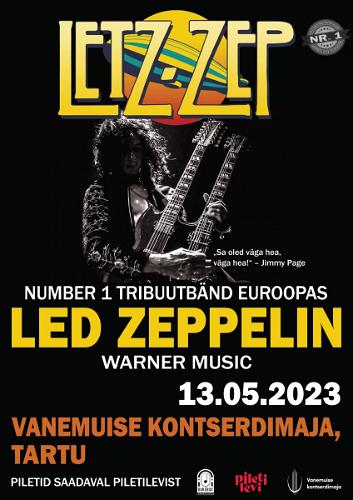 Letz Zep are a truly global act and are internationally recognized as the Number One tribute to Led Zeppelin.
Letz Zep have performed on six of the world's seven continents, the only exception being Antarctica.

That was the comment in Q magazine by Robert Plant himself on the Letz Zep gig he attended in London, he continued to say that it is like watching himself on stage! Robert also commented that the physical similarity between himself and Letz Zep vocalist Billy Kulke is 'Spooky'.

Letz Zep are internationally recognised as the official number one tribute to Led Zeppelin.

Letz Zep are the best known and most successful tribute to Led Zeppelin and have written a page into the history of tribute bands with their achievements.

Warner music themselves name Letz Zep as 'Europe's best tribute to Led Zeppelin' and they should know, being the record lable for Led Zeppelin themselves.

Letz Zep is formed by talented and respected musicians who are all true Zep fans with a strong musical pedigree. Its members have toured with artist such as Ozzy Osbourne, Roger Daltrey, Debbie Bonham, Guy Chambers, Steve Hackett, Dr Feelgood, Saxon and Uriah Heep, to name but a few.

Letz Zep are not an exercise in nostalgia but a heart rendering cry against complacency and forgetfulness. Faithfully recreating the sights and sounds of Led Zeppelin at their awesome best.

What people are saying about Letz Zep:

'I watched the whole show and loved it, you guys are great' - John Lodge, The Moody Blues.

'There are good tribute bands and there are bad tribute bands, then there is Letz Zep, who are monsters an play in a different league to the rest' - Metal Portal Spain.

'You can't have too much of a good thing, here's Letz Zep' - Jeremy Paxman BBC2 Newsnight.