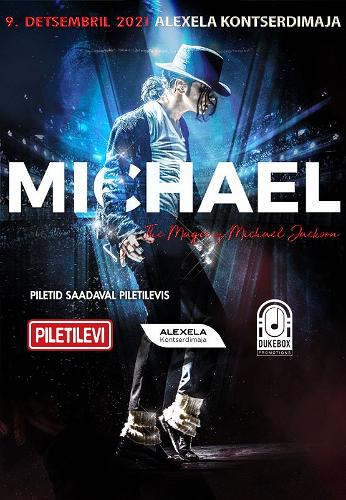 Two iconic artists tribute shows are now 1=2! Buy The Ultimate Elton and the Rocket Band ticket and you will get The Magic of Michael Jackson ticket for free!

For getting free ticket send a picture of the bought ticket (without bar code) to DukeBox Promotions OÜ by Facebook message or to e-mail info@avbservices.eu and e-mail address where you wish to receive a ticket for  The Magic of Michael Jackson show. The campaign is valid for the tickets which are bought during the period 9.06.2020-16.06.2020.

There once lived a KING. The king loved to sing and for many many years his songs brouhgt warmth and kindness into people’s hearts. His great talant and creativity inspired millions of people around the world. MICHAEL JACKSON. THE KING OF POP MUSIC.  The music of Michael Jackson is not like any other music, he performed impossible dance moves and he was a singer who steped over all the boundaries of taste and style. Michael Jackson was not afraid to experiment and launched the so-called cross-over era in the music industry that organically combines many different styles, such as pop, rap, heavy rock, solo, blues etc. After 35 years, we are currently witnessing the peak of the cross-over era. Michael Jackson’s songs found their way to the ears of young and old people.

Tallinn citizens and guests of Tallinn have a unique possibility to remember all the best hits of Michael Jackson in performance of Ben Bowman – MICHAEL starring Ben straight from London West End, such as Thriller, Beat it, Billie Jean, Man in the Mirror and many others. MICHAEL starring Ben is the best tribute to Michael Jackson in Europe, which has won many awards and has been acclaimed by The Telegraph, BBC Radio and many others.  The production features an incredible live band, stunning costumes, iconic dance routines and of course, the inimitable Ben. The show promises to create the most authentic, lively and powerful re-creation of the iconic superstar you will ever experience. Take a journey back in time as we remember the man, the music, the magic, Michael! Only one show will take place in Alexela Concert Hall on 4th November 2020 at 19.00. Don’t miss it!