How fast do Estonians move

How fast do Estonians move

Estonia has developed into one of the most advanced countries in Europe at a remarkable speed. We take a closer look at how fast and far Estonians have come in terms of transport and pace of Estonian wildlife.

The ordinary Estonian is slightly taller than the average European, but on foot Estonians tend to be on the slower end of the scale at 5 km/h*. For a small compact country where everything is within arm's reach, there indeed seems no reason to hurry. There's also the question of landscape - why don't you try walking across the marshlands? For clarity, this activity is called bogshoeing and it's actually quite fun.

Sandy beaches slow down the local pace of life, especially in the summer.

Talking about taking it slow, even the local Tori horse breed is more of the leisurely variety. Originating from an industrious and strong Estonian working horse, speed is not necessarily what the Tori horse is praised for. The Tori horse does however beat the common Estonian at an average  speed of just 6,4 km/h.

Now, just to avoid a stereotype in the making, let's speed things up a bit. An Estonian bloodhound on the other hand can run up to 40 km/h, so by all means it should wear a helmet and license plate if we were to nitpick. This stubborn creature, a characteristic often attributed to Estonians, is known to learn only up to ten commands and it won't wait up when it senses prey is near.

Estonians, being slow walkers and all, have invented clever ways to avoid unnecessary movement altogether. Take for example the small delivery robot from Starship Technologies, which can deliver purchases, packages, and even pizza to your front door. It moves 10 kg in a 3 km radius at a brisk 6 km/h. Then there's the foldable electric scooter Stigo, which travels at 25 km/h. To pick up momentum, The Ampler bikes can go as fast as 35 km/h and make cycling an effortless task. 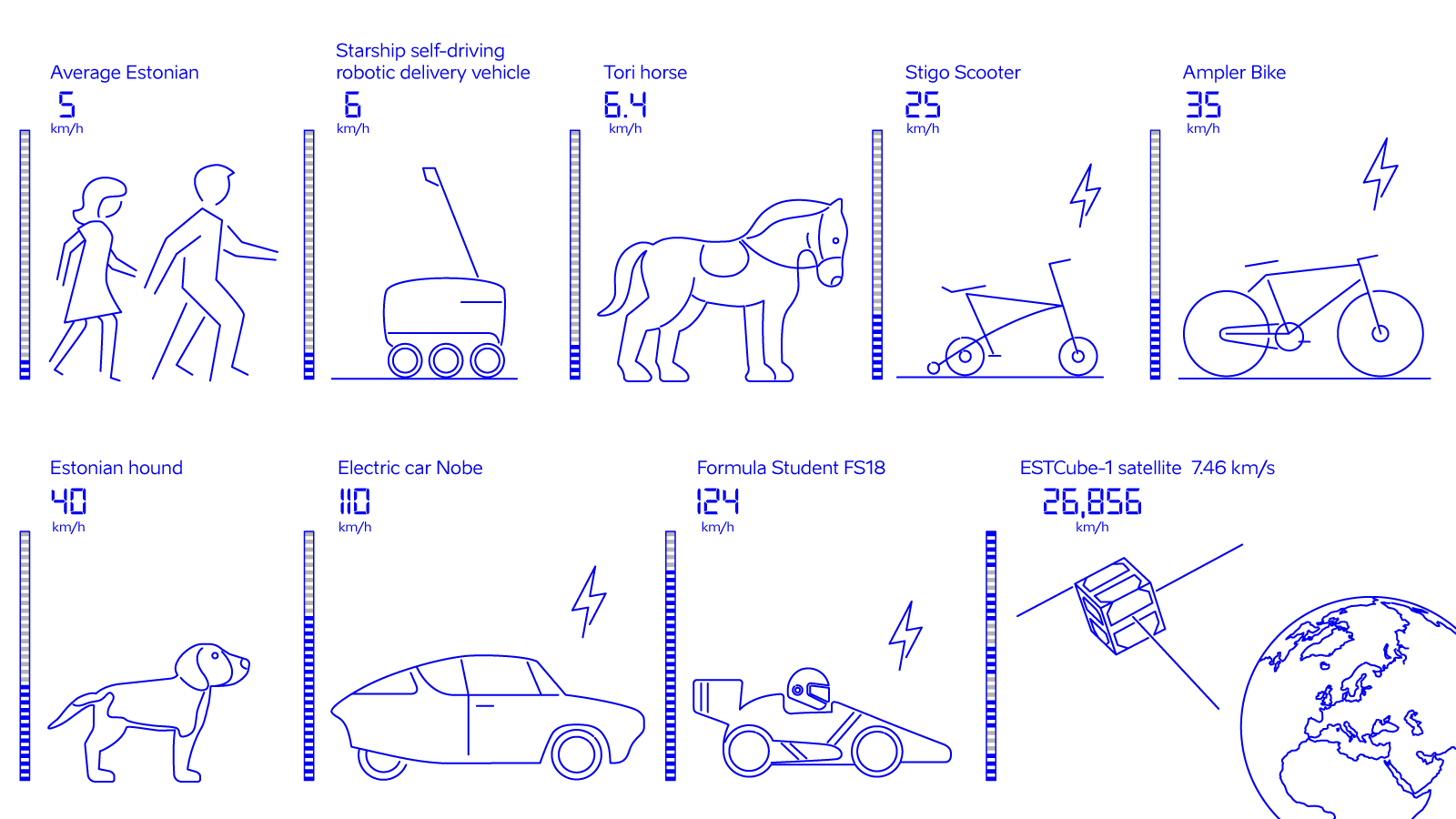 With all the traffic, the state of our environment definitely becomes a priority. That's where the Estonian electric car Nobe comes in. Built for the stylish and environmentally aware, the three-wheeler can help you run your daily errands at 110 km/h. The team of student formula FS "Team Tallinn" builds a brand new electric race car for every sporting season. The last model boasted an acceleration of zero to 100 km/h in 1,87 seconds. Not bad for an electric car, right?

Finally, we introduce you to the fastest Estonian - metaphorically speaking. ESTCube-1 is a satellite developed and constructed in Estonia as part of a student research project at the University of Tartu. ESTCube-1 races through orbit around the earth since 2013 at 26,856 km/h.

How to survive an Estonian winter

With some good advice from locals, any visitor can learn how to stay warm and cosy during a winter visit and get the most out of Estonia.

Billy Perry, a YouTuber & BMX rider from the US, goes off-road BMX the Estonian way – in the snow.

While travelling in Estonia, take advantage of these useful mobile applications to check out restaurant menus, order taxis and more.

Estonians and their neighbours

Estonians – who they are and what do they think of their neighbours?