Western allies have sanctioned Russia. It is extremely important that, driven only by mistrust, we do not extend it and sanction each other in hidden form. If we become too sceptical, cancelling travel plans and reservations now, we reduce our contacts and create unnecessary hardship for allies' economies – not because of the threat of war, but only because of fears.

There is no travel warning to visit Estonia, other Baltic states or Nordic countries, all of which are located near Russia (e.g. official travel advisories by US; Germany's Foreign Minister Annalena Baerbock invites German visitors to spend their holiday in the Baltic States; Finnish and Estonian ministers of Economic Affairs Mika Lintilä and Andres Sutt promoting travelling to Estonia and Finland).

A holiday or business trip maintains direct contacts among people, relieves mistrust and tension, and makes a direct contribution to improve the economy and security situation all over Europe.

• Russia is the aggressor responsible for the war against Ukraine, where Estonia, along with the Western countries, is supporting Ukraine and the Ukrainian people. Estonia is helping Ukraine through international cooperation, but Estonian people and companies have also convened to help Ukraine.

• Per capita, Estonia has given Ukraine more military, medical, technical and humanitarian aid than most other countries.

Estonia is in Northern Europe

• Estonia is the northernmost of the Baltic states, located only 80 km from Helsinki, the capital of Finland.

• Currently, there is no military threat to Estonia. The war is going on just as far away from Estonia as from many other European countries. For example, it is about 1300 km from Tallinn to Kyiv – exactly like from Berlin to Kyiv or from Vienna to Kyiv.

Estonia is the member of the most powerful international organisations

• Estonia also is recognized by tourism organisations at the international level. Visit Estonia is a member of the board of European Travel Commission (ETC) and chairs the ETC marketing group.

All services operate without restrictions throughout the territory

• There are no more coronavirus restrictions in Estonia and all services are available in full throughout the country. We invite all visitors to discover and rediscover Estonia, from the westernmost destination, beautiful island Saaremaa to Narva, the city on the eastern border of the European Union.

• Indeed, life in Narva is normal as always, for example Narva hosts Tallinn Music Week this May, one of the largest and music and urban culture festivals in Northern Europe attracting journalists, opinion leaders and cultural figures from all over Europe.

• This summer, there are direct international flights to 50 destinations from Tallinn Lennart Meri airport. For example, for the first time in history we have 4 regular routes from Italy: Rome, Milan, Naples, Venice.

• We have comfortable and quick bus connections with Latvia and Lithuania and several tour operators offer Baltic tours.

• Nearly 200 cruise ships both from Europe and America are coming to Estonia this season.

Estonia is a highly valued destination in international rankings

• This April, Estonia joined the MICHELIN Guide as the 37th destination in the world, which is a recognition to Estonia's culinary scene quality. The first restaurants to enter the world-famous selection will be announced on May 25th in Tallinn.

• The independent 2022 – best remote work destination in the world (Tallinn)

Estonia is a reliable and desirable destination for new tourism investments

• Radisson Collection Hotel – opened in Tallinn already in 2001, the renovated hotel welcomes guests from the 1st of May. The 5* luxury hotel features 287 guest rooms designed by Estonian designers, including 19 suites, a spa complex, a 1,000 square meter conference centre and two new first-class restaurants.

• Novotel Living – 124 guest rooms in Tallinn port area. Planning to open as Accor group hotel in the beginning of 2024.

Estonia is a reliable and desirable venue for international events

• Numerous international conferences for professionals will be organized in Estonia this year, several each month – among them many different medical and cyber research conferences etc.

•  Accommodation. The tourism sector has been at the forefront of helping Ukrainian refugees settle down. Estonian hotels have provided the first place to relax and sleep after a long journey and to spend first weeks safely. About 30 000 refugees have arrived in Estonia, most of them have found other accommodation by now and hotels are warmly welcoming visitors.

• Employment. Accommodation establishments offer to hire Ukrainian refugees on the spot and there is a possibility that a refugee lives and already works in a hotel where he or she arrived. The Unemployment Isurance Fund opened a job offer environment for Ukrainian war refugees, there are also many offers from tourism enterprises.

• General support. Visit Estonia's close partners Invest in Estonia and Work in Estonia have set up a special web-page for Ukrainians with information about visas, medical help, free school and kindergarten, e-residency and founding businesses for Ukrainians.

• Museums and culture. More than 60 Estonian museums and exhibition institutions have decided to grant free admission to Ukrainian war refugees on the basis of a document certifying citizenship. The aim of the initiative is to facilitate the integration of war refugees in Estonia. Free cultural and leisure activities in Tallinn

• Transportation. Ukrainian war refugees can travel by train and bus free of charge using a valid public transport card valid on both trains and city and county buses.

• Estonia has closed its airspace to Russian air operators.

• Estonia has suspended the issuing visas in Russia and Belarus. Starting from March 10, it is no longer possible to submit visa applications at the Estonian foreign representations in Moscow, Saint Petersburg, Pskov and Minsk, as well as at the visa centres in Russia and Belarus. All visas already issued are valid until their date of expiration. Estonia continues accepting the visa applications of those Russian and Belarusian citizens who wish to come to Estonia to visit family members, as well as for humanitarian reasons, like a severe illness or a funeral of a close relative.

• The Estonian Tourist Board does not plan any marketing activities (e.g digital campaigns) for end consumers (visitors) from Russia. Also all B2B activities are stopped:

- we do not invite Russian tour operators to FAM-trips to Estonia;
- we do not organize traditional marketing events in Russia, such as presentations and workshops in Moscow and St. Petersburg or roadshows in other major cities in Russia;
- tourism representative in Russia has left the post in Moscow and joined the Visit Estonia team in Tallinn with other projects. 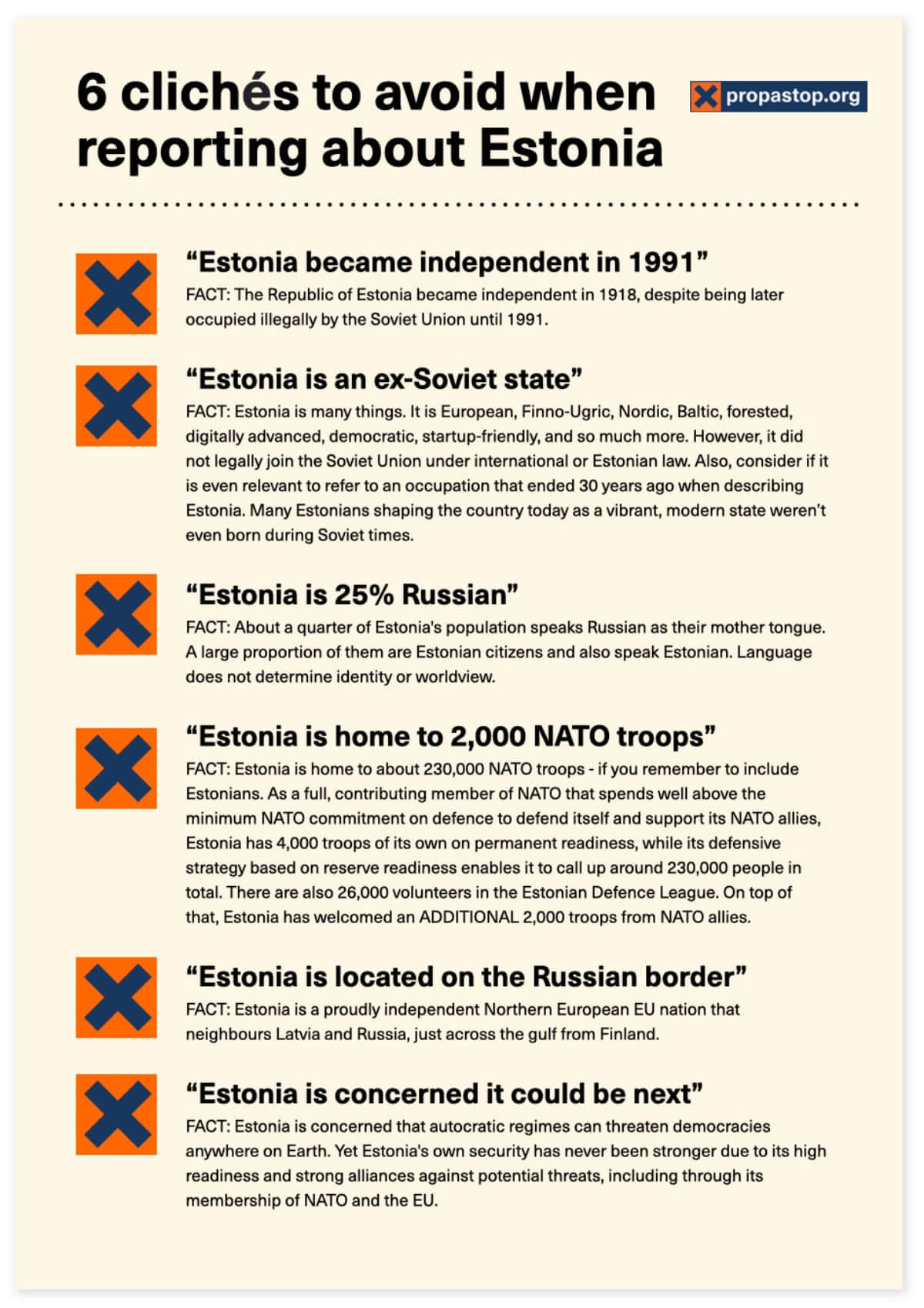