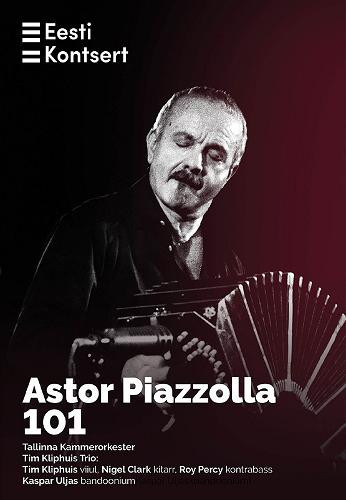 Piazzolla's works will be performed as originals and in Tim Kliphuis's arrangements.

Kaspar Uljas, the only Estonian bandoneon player, will take part in with his "Piazzolla instrument".

We hope that today's Piazzolla program is a little bit more than just a jubilee concert. Of course, the concert will feature the composer's well-known standards, such as "Libertango" and "Oblivion," but there are also references to Piazzolla's love for jazz from the composer's years of development in New York.

A major influence in Piazzolla´s life was also classical music, which he studied with Nadia Boulanger in Paris. As a child, the future composer also played Bach on his beloved bandoneon.

The Tallinn Chamber Orchestra and the Tim Kliphuis Trio have, on several occasions, presented their common musical chemistry and impeccable knowledge of each other very convincingly. Tim Kliphuis's unique and ingenious arrangements have always been warmly received by the audience.