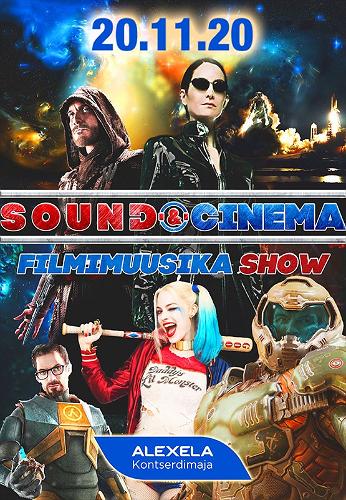 First time in Estonia “Sound & Cinema: soundtrack show” at the Alexela Concert Hall. “Sound & Cinema” is a vivid multimedia show which contains the most popular soundtracks from the world known movies, cartoons, and video games.

You will absolutely fall in love with a masterly performance both electronic and acoustic instruments including light show and video installations. And the main point is a live communication with the audience as well as a joint performance of several compositions. In sum, the show is required to view not only for moviegoers, music lovers, and gamers but also for fans of classical crossover so popular today.

The show’s track list will include music from significant movies such as “The Matrix”, “Iron Man” and “Desperado”, epic soundtracks from the films “Inception“ and “Game of Thrones”, compositions from iconic video games “Half Life 2” and “Doom”, and also lyrical main themes  from the films “1 + 1” (piano solo), “Requiem for a Dream”, “Leon” and many others.

The authors of the show are the “NOIR string quartet”, musicians who subdued the art of arranging in all styles and directions. The fusion of live and electronic music, classical and rock instruments, epic rhythms and modern dance styles in synchronous combination with video and light show - this is how the creators of the “Sound & Cinema”  see the approach to performing cinema music. That is how YOU will see it on 20.11.2020!

The Alexela Concert Hall will delight you again with its comfort and, most importantly, with chic sound and lights. This is the perfect venue for “Sound & Cinema” show.